We have been busy with a variety of projects.  Please look for news on our Instagram page @jaydaveywillow.

This was the first year the RHS held a show at Chatsworth House.

The Belmond Enchanted Garden was designed by Butter Wakefield and built by multiple medallists Outdoor Options.  We were thrilled to hear that the garden won a gold medal, as well as the coveted People's Choice Award.

Jay's work included bespoke willow panels and entrance arches.  The unusual panels were quite a hit, set with multiple wreaths and were similar to what Jay made at Belmond Le Manoir aux Quat'Saisons, Raymond Blanc's celebrated 2 Michelin starred restaurant.  Belmond were the sponsors of the garden. In preparation for the gardeners there to grow on the vegetables for the show garden, Jay also made beautiful willow cloches for support. Specially made "rings" of woven willow were also made by Jay, which were used as raised bed type planting areas for the vegetables. Since the show, these rings, along with some of the plants were moved to a community planting area in London.

A most enjoyable project! 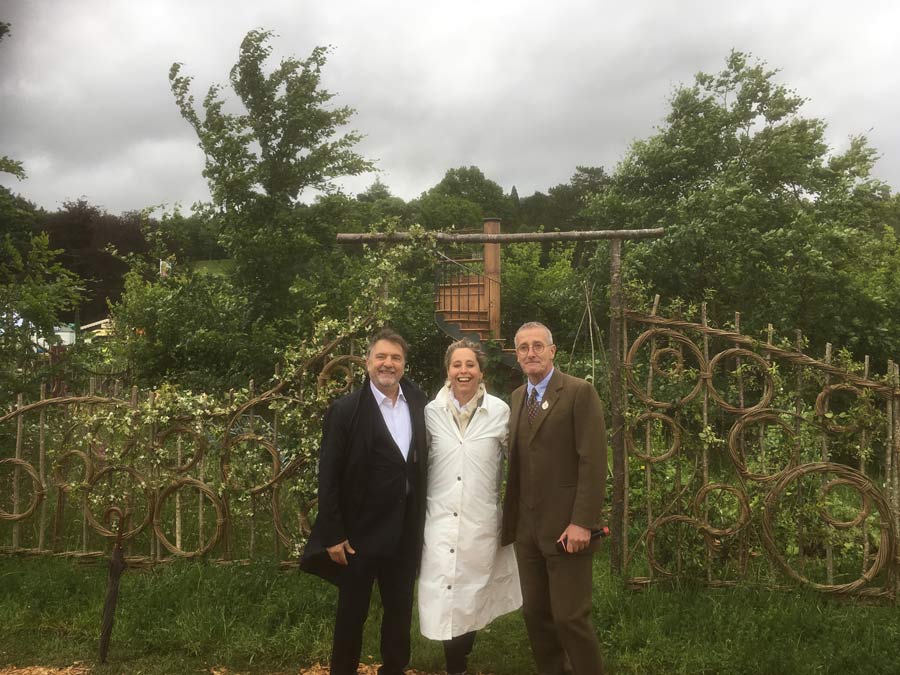 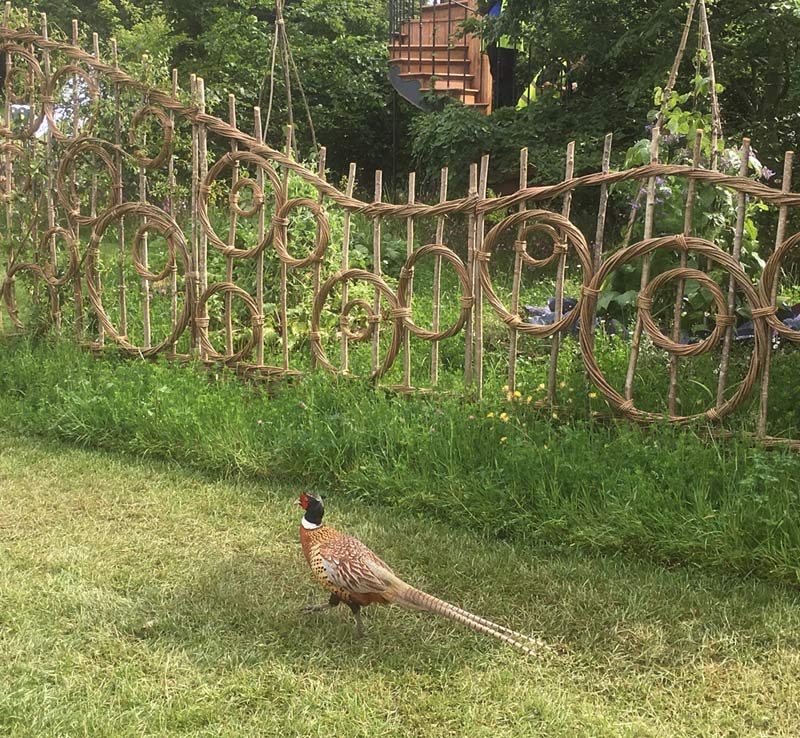 This project included design and build for the PMS: Outside Inside Garden for NAPS, with all willow and hazel structures, furniture, hurdles and perimeter boundary produced by ourselves.  Designed by Emma Bannister Landscape Design, this garden received a Silver Gilt, with top marks for all the willow work.

You can see the BBC coverage and read more about it at: http://ebannlandscape.com/the-bbc-film-our-show-garden-at-the-rhs-hampton-court-palace-flower-show and on our Facebook page.

The garden was designed to create greater awareness of severe PMS and the natural style of the garden was very well received. Many hard-working volunteers gave their time to help create the garden and Landscape Associates deserve a special mention for the quality of the build.  http://www.landscapeassociates.co.uk 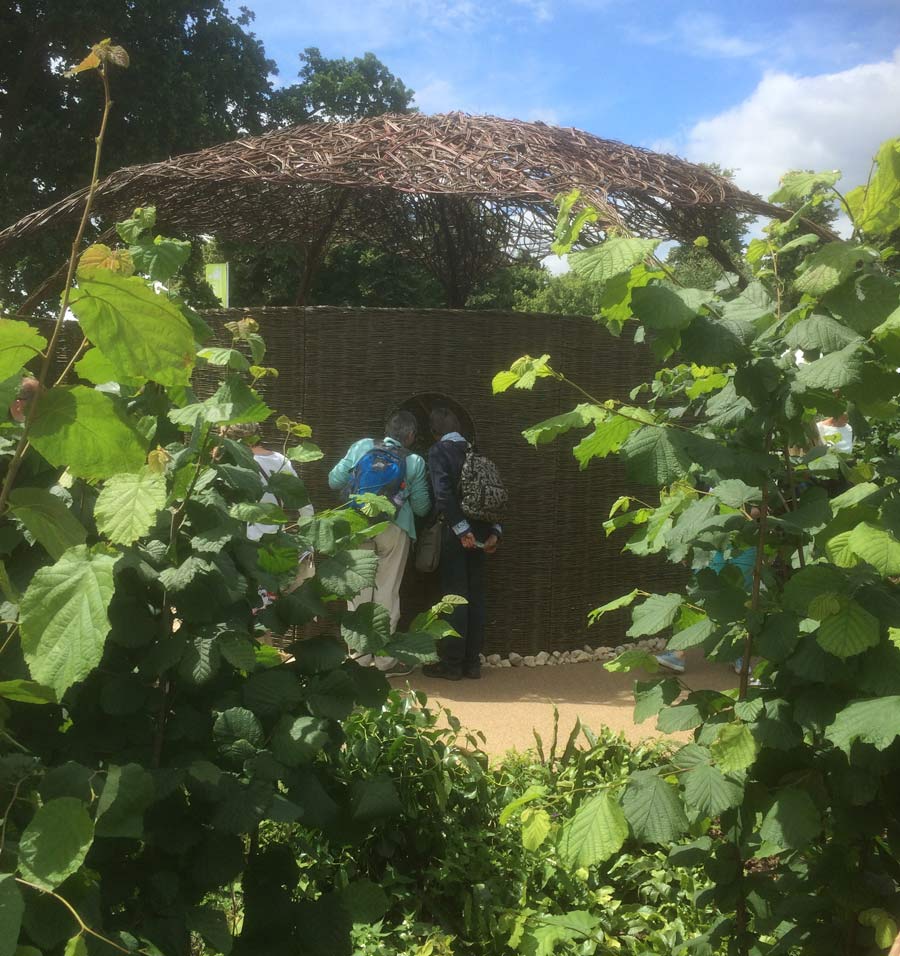 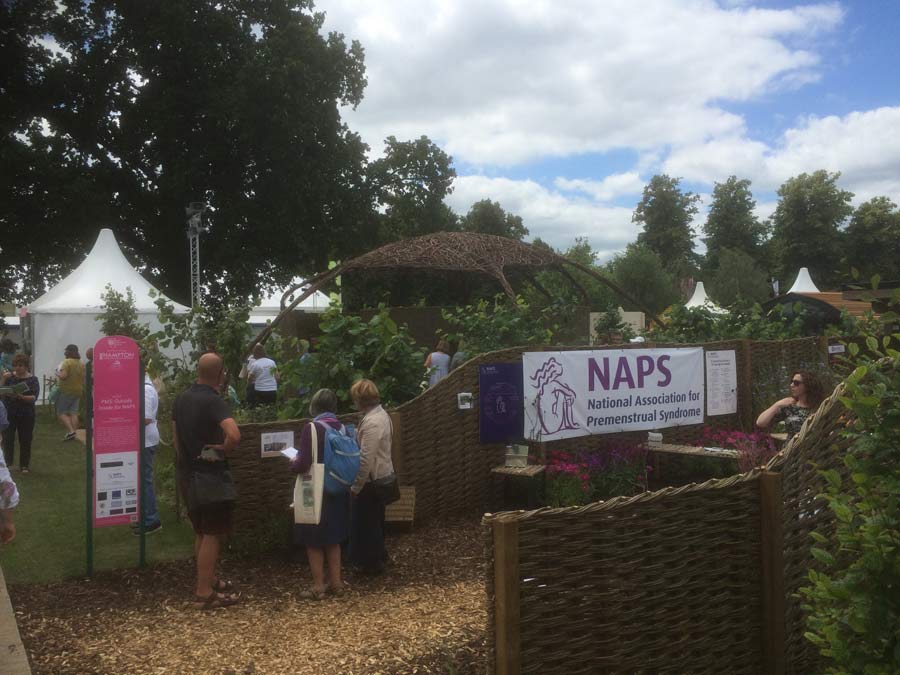 Include London, Somerset, Wiltshire. The willow panels below are framed with chestnut. 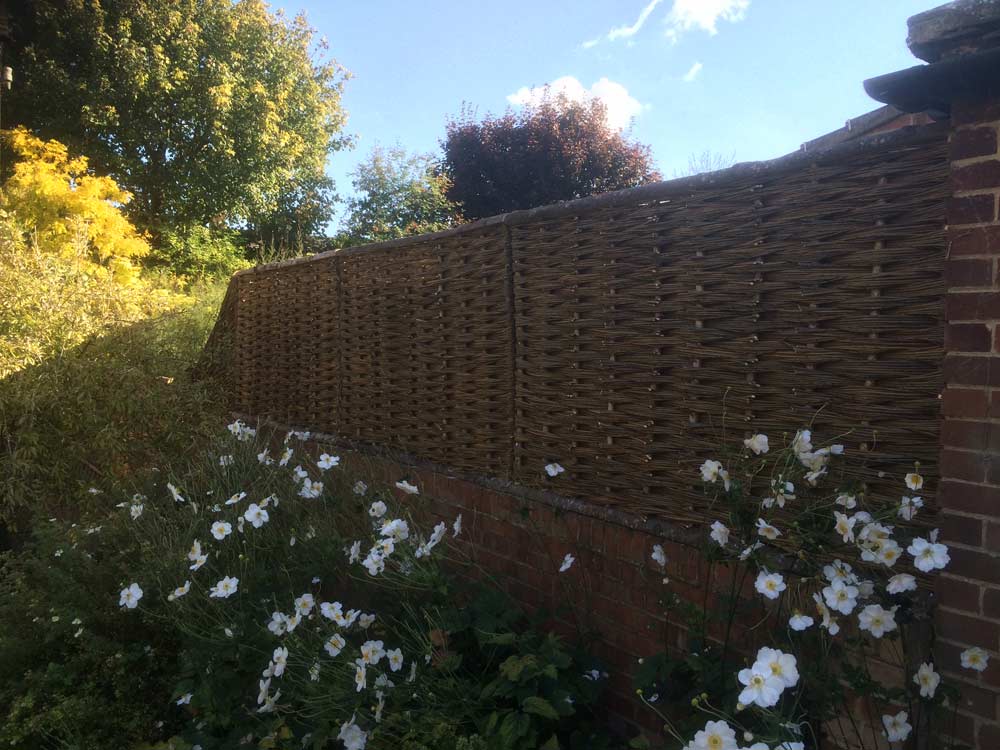 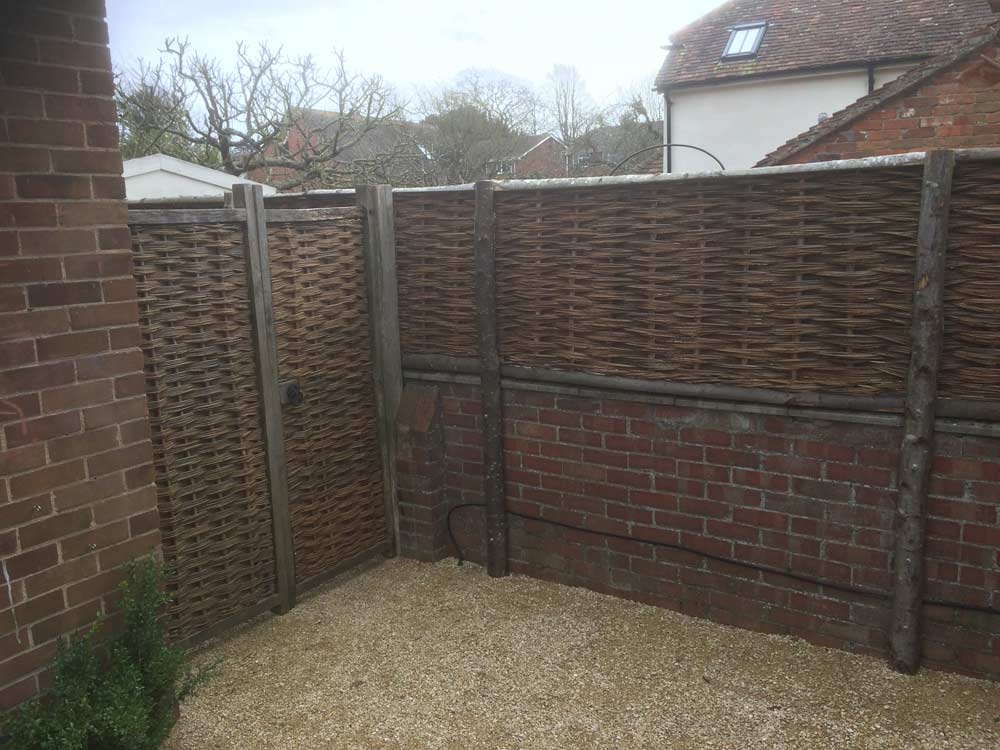 Recently opened in 2015, Soho Farmhouse is a member's club in 100 acres of Oxfordshire countryside.  There's a seven-bedroom farmhouse, a four-bedroom cottage, 40 cabins , several restaurants and facilities galore - and you don't need to be a member to stay.  Cabins overlook one of four manmade lakes or a stream.

My work here involved liaising with Head Gardener Anna Greenland, providing large hazel conical climbers and creating bespoke arches and insitu plant supports for the Kitchen Garden. These structures support a variety of produce, as well as look attractive.   It was fascinating to see the garden site develop over time.  Guests have made many positive comments since the work was completed, as well as requests for similar structures.  You can find more photographs of this work,  in the Insitu section of the website.

For more information on this luxury farmhouse resort:  www.sohofarmhouse.com 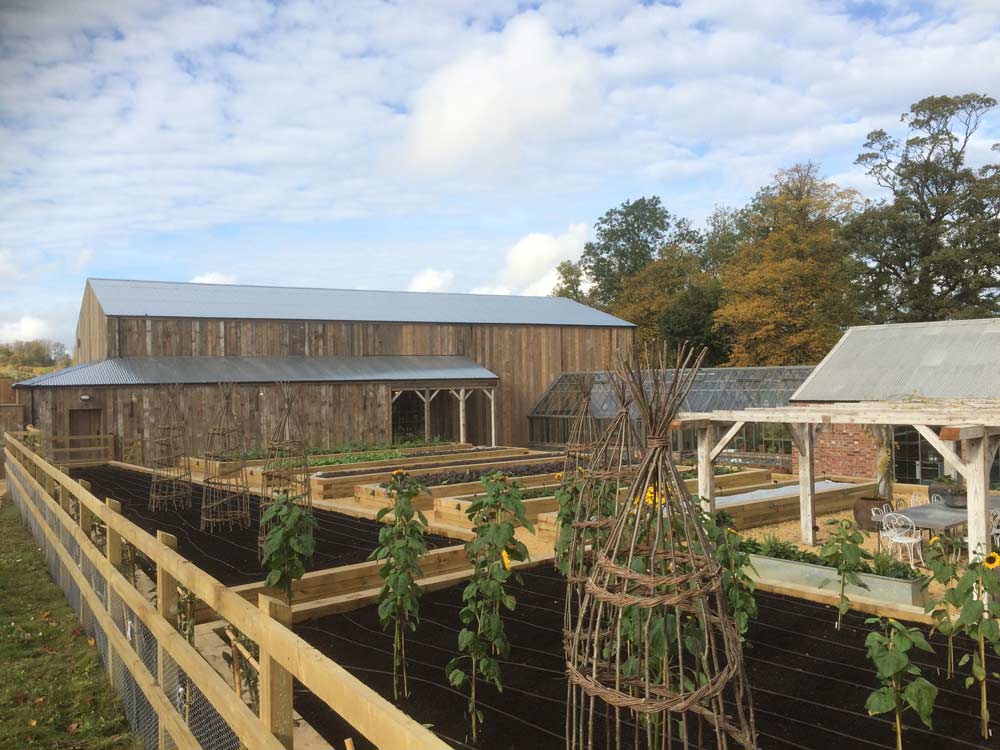 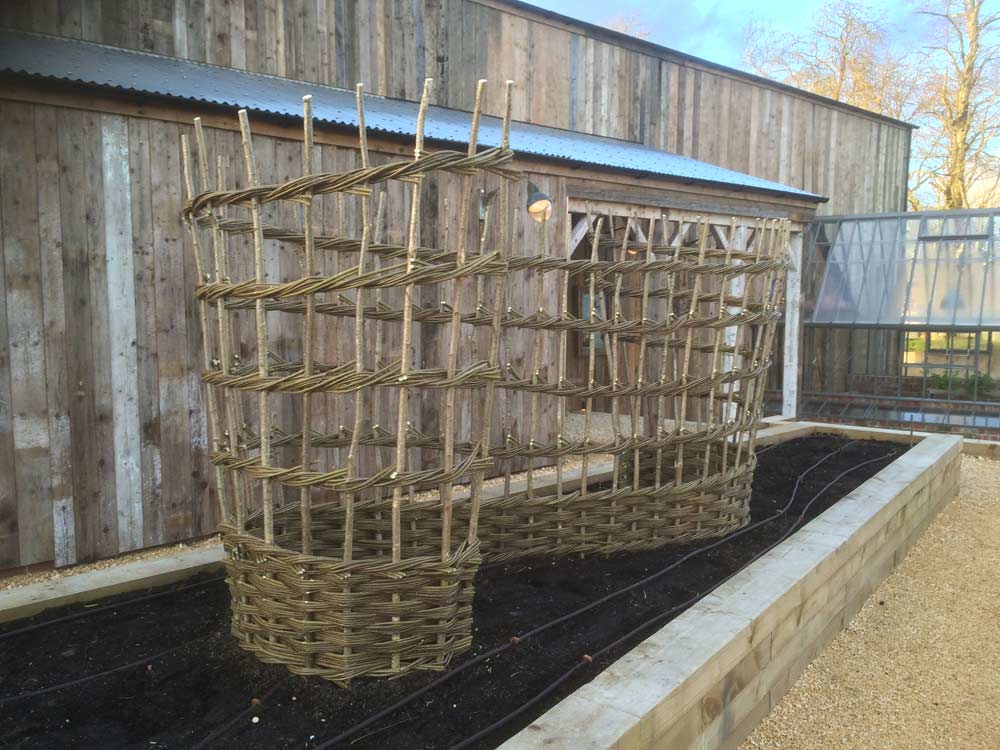 Include Oxfordshire, Somerset. These bespoke gates for 2 different clients provide protection from the road elements and create an attractive entrance. 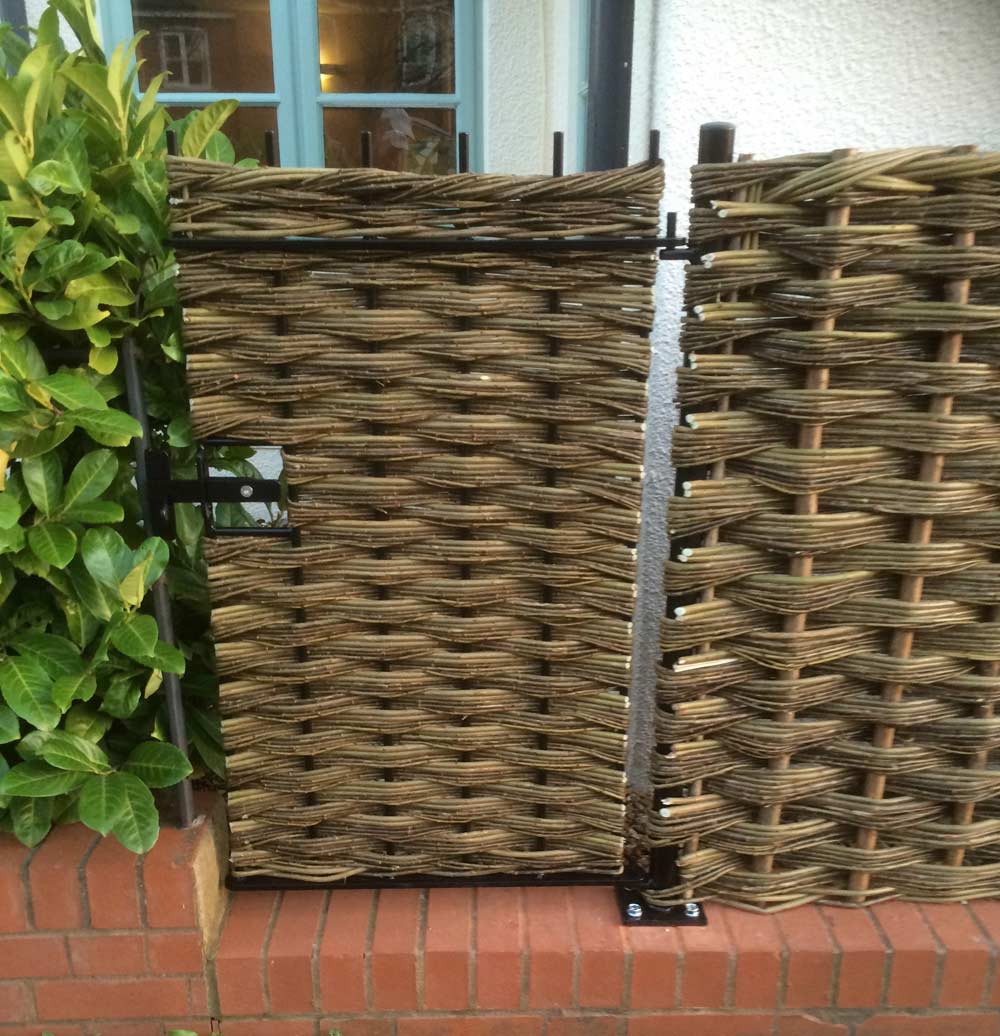 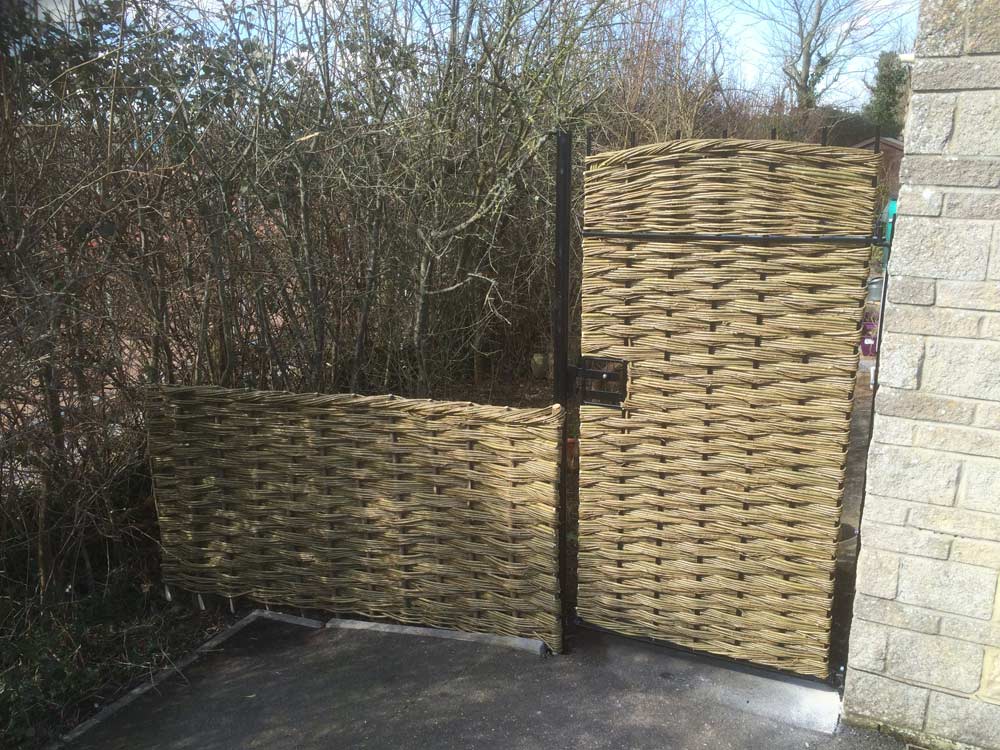 These willow hurdles installed on stone wall have given our clients more privacy.

These bespoke willow surrounds for vegetable or flower beds are made in one piece to drop over the existing framework. 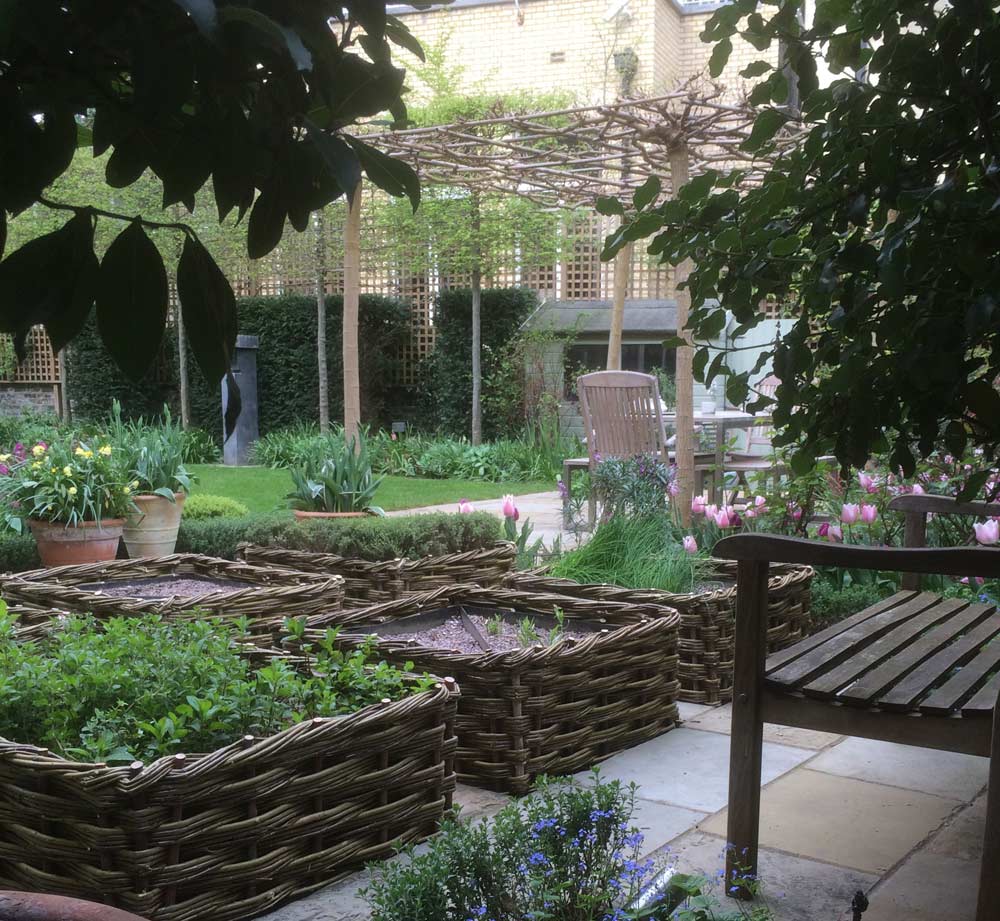 In early 2016, I wove this "winged nest" which forms part of the front of house display for the two-part play, Harry Potter and the Cursed Child. The majority of the nest is woven with Somerset willow, with a metal frame for support.

The nest was kept under wraps until the recent unveiling at the Palace Theatre.  I worked with Aden Hynes and his talented team at  Sculpture Studios, who made the figure in the nest and have expertise in theatre set building, polystyrene carving, exhibition set building and more.

The associated image is found on the cover of the book -  "Harry Potter and the Cursed Child Parts I & II" by Jack Thorne, which is based on an original story by J.K. Rowling, Thorne and John Tiffany. It follows Harry as an employee of the Ministry of Magic, husband and father of three kids.  The play opened with rave reviews.

A very interesting & enchanting project, which I enjoyed immensely.  If you would like your very own nest, photographs of similar garden structures  can be found in the Bespoke and Art & Sculpture sections of this website.